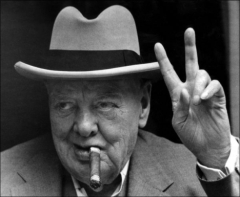 Note the events, experiences and names alluded to in a mere impromptu 1:26 off the cuff interview at an office visit. Amazing. He did not have time to mention his over 100 patents and doing research work on a mechanical heart with a famous Johns Hopkins’ cardiovascular surgeon! And it is 100 and 1/2…not just 100… and don’t you forget that. Can you imagine being able to say you’ve met Winston Churchill?

listen); née Nehru; 19 November 1917 – 31 October 1984) was an Indian politician and central figure of the Indian National Congress party. She was the first and to date the only female Prime Minister of India. Indira Gandhi was the daughter of India‘s first Prime Minister, Jawaharlal Nehru. Despite her surname Gandhi, she is not related to the family of Mahatma Gandhi. She served as Prime Minister from 1966 to 1977 and then again from 1980 until her assassination in 1984, making her the second-longest-serving Prime Minister of India after her father.

Gandhi served as her father’s personal assistant and hostess during his tenure as prime minister between 1947 and 1964. She was elected Congress President in 1959. Upon her father’s death in 1964 she was appointed as a member of the Rajya Sabha (upper house) and became a member of Lal Bahadur Shastri‘s cabinet as Minister of Information and Broadcasting. In the Congress Party’s parliamentary leadership election held in early 1966, upon the death of Shastri, she defeated her rival, Morarji Desai, to become leader, and thus succeeded Shastri as Prime Minister of India.

As the Prime Minister of India, Gandhi was known for her political ruthlessness and unprecedented centralisation of power. She went to war with Pakistan in support of the independence movement and war of independence in East Pakistan, which resulted in an Indian victory and the creation of Bangladesh, as well as increasing India’s influence to the point where it became the regional hegemon of South Asia. Gandhi also presided over a controversial state of emergency from 1975 to 1977 during which she ruled by decree. Akin to Mahatma Gandhi’s fate, she was assassinated by Sikh nationalists in 1984. In her case, her elimination by her bodyguards was claimed to be a retaliation for the storming of the Harmandir Sahib (Golden Temple) in Amritsar that she ordered to counter the Punjab insurgency, less than a month before her 67th birthday. The assassins, Beant Singh and Satwant Singh, were both shot by other security guards. Satwant Singh recovered from his injuries and was executed after being found guilty of murder.

One thought on “Ival O. Salyer: Maybe the most interesting person alive…and a patient of ours!”