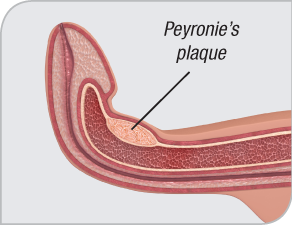 What is Peyronie’s Disease?

Peyronie’s disease is where plaques (segments of flat scar tissue) form under the skin of the penis. These plaques can cause the penis to bend or become indented during erections. The plaques can often be felt through the skin, and can also be painful.

Video Explaining the Mechanism of Peyronie’s